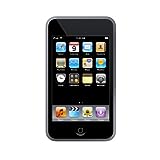 I dragged myself out of bed at 5:00am today and played 18 with Andy at Hillcrest Country Club. I shot an embarrassing 63 on the front 9, but an at-least-average 55 on the back 9. (My father-in-law gave me a round of golf lessons with the club pro at Lakeside Country Club as a gift for my 35th birthday. The goal is to break 100 before Christmas.) We were done by 9:30, so I grabbed a copy of Wired and drove to the Apple store in the Westfield Century City Mall.

I got in line at 10:05am and was (surprisingly) the 18th person. The store website said that they would open at 11, and I figured if I read every single article and advertisement in the magazine, I’d only have about an hour to stare into the sun waiting. My plan did not work. By 10:25 I had finished reading. But that’s okay. That’s when the fun began.

A short, Napolean-complex mall security guard came to tell us that we couldn’t remain in line in front of the store. (The terrorists have already won.) By this time there were a good 50 people in line behind me. We all marched dutifully out to the edge of the mall and he sent a clipboard down the line so we could record our spots. He also announced that the store wasn’t going to open until noon. My friend Kelly was the 11th person in line at the Northridge Apple store, and, via text message, he agreed with me that the security guard was an idiot. The website said 11 and Apple is in the middle of their biggest event of the year. Why would they not open until noon?

But the security guard’s claim of noon did manage to scare away two of the people in line ahead of me and quite a few of the people behind me. There were a good 100 people behind me by 10:45. An Apple employee named Justin came to tell us all that the store opened at 11, but he was going to be taking people in groups in just a few minutes. First, though, he asked if anyone had a ticket from the previous night. Apparently on Saturday they had to stop selling before everyone in line got a chance to purchase, so he had given about 50 “tickets” to them and told them they’d get first in line today. There were 22 of them and they got to jump the line. That was a little aggravating because it meant I went from 18th to 16th to 38th, but I had to respect the Apple guy for being fair to the people that had waited all day Saturday.

Many of the less healthy-looking complained about the lack of shade, so the line was moved out of the sun. Also, the Apple employees brought us bottled water and Quaker Chewy granola bars, which was astoundingly nice of them, I thought.

Justin ran back to the store and then came to tell us that they only had 40 black 16GB iPhones in stock. Then he counted from the first person in line asking who wanted that model, how many they wanted to buy, etc. I learned that I would get the last 16GB black iPhone of the day. Talk about good luck! I would have been pretty upset if I’d waited a couple of hours and then been told it was white or 8GB or nothing. Justin took the obnoxious security guard’s clipboard and the first fifteen people in line and off they went.

While we waited, the rest of us talked about college football, the heat, the fact that AT&T was screwing us on the “upgraded” rate plans, and all sorts of random fun stuff. There were two European guys in line 4 or 5 spots behind me that were driving us all crazy. One of them was on a very loud and ridiculous, typical LA cell phone conversation. He was explaining to his caller — loudly enough so that we could all hear, of course — how much fun he’d had at the VH1 after-party hanging out with the Foo Fighters, Pearl Jam, and The Who. He had Fabio hair and was wearing his dress shirt opened to the navel, along with a pair of white jeans. His buddy was talking about how rich he is and how he couldn’t believe he was standing in line with the rest of us schmucks. I mean, seriously. They couldn’t have been more stereotypical LA douchebags if they’d been trying.

It only took Justin about 20 minutes to return for the next 15 people. I would be in the 3rd group. While everyone was talking about how nice and quickly things were moving along, nobody noticed Mr. and Mr. Douchebag sneaking around the side and going with the second group until it was too late. A few of us told the security guard, but he did not care. He acted as if he cared, but he didn’t attempt to go get them. This is when many cries of BS! started emanating from the rest of us. Because Justin had made a point of asking us all which model we wanted, we knew that those two jerks were going to get two of the remaining 16GB black ones, which would mean I was going to be screwed. I told this to the security guard and he just said that they had the clipboard and everything would be okay.

I said that if I saw either of those guys walking out with a 16GB black iPhone, I was going to kick their f#c*i%g asses. Three or four of the guys behind me agreed that it would be the correct thing to do, in addition to smashing their new phones and, quite possibly, shoving some Foo Fighters CDs up their … ahem … behinds. The security guard told me that I needed to “stop bitching’ because I was on “private property”. He told me to “quit crying” because I was going to get a phone, so what did it matter if I had to get a white one? I said that I certainly wasn’t “crying” and that I wasn’t the one who had cut the line and broken the rules. He told me to just be quiet and asked, “Nobody else is complaining so why are you?” One of the guys behind me in line yelled, “Because he’s right!”

The wife of the guy behind me told the security guard that this was completely unfair and that he needed to go get those guys. He refused. So she went and did it on her own. She came back a minute later with Justin, who had “the list” and asked us what was happening. The wife explained what the guys had done and Justin said he’d handle it. He returned to tell us that he’d kicked the two guys out of the store and told them not to come back until tomorrow. A cheer went up from the crowd. The security guard disappeared and we didn’t see him again either.

When I finally got into the store, I learned that — for Lord knows what reason — my AT&T account was tagged as saying that I receive a US Army discount. I’ve never been in the US Army, and I’ve never claimed to be in the US Army, so I have no idea how that happened. It took me about 30 minutes of dancing on the phone with AT&T customer service to get that resolved, but luckily the Apple rep helping me set aside my 16GB black until I was done.

So there you go. That’s my new 3G adventure.

Did you know that Amazon will donate to the charity of your choice when you use smile.amazon.com to do your online shopping? It doesn't cost you anything extra, and you can make a big difference just by using this link.