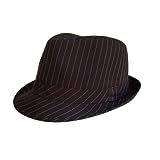 The chapeau pictured here has become pathetically popular in Los Angeles lately. For a year or so we referred to it as The K-Fed, but now we just call it The Douche Hat. (This should not be considered a compliment.) Even K-Fed hardly ever is seen in public donning it these days, it’s become so tragically tarnished. Let’s get something straight right now: There is a very select group of individuals who can wear this hat. Unless you are one of the following, you should quickly remove it:

That’s it. Everyone else needs to just stop it.