The college football homepage at ESPN reads “Saturday Bloody Saturday”. Then it says, “Auburn beat Florida. The SEC body count is complete. On every given Saturday, someone loses in the Bloody South.” It goes on to state, “In the end, that merciless SEC claimed another victim as Florida became the fourth team ranked No. 2 in the AP Top 25 to lose this season, joining Texas, Notre Dame and Auburn.”

The game recap states that it was over when … “Eric Brock picked off Chris Leak at the Auburn 46 with less than three minutes left to play. The turnover led to an Auburn field goal that put the Tigers up 21-17.”

I disagree. The game was over at halftime. Tuberville fired up his defense and, in his own words, questioned their manhood. Apparently Urban Meyer told his offensive line to start playing like girls. The game wasn’t lost on Leak’s flailing end-of-game interception. The game certainly wasn’t lost by the defense. Aubrun didn’t score an offensive touchdown! The game was lost five minutes into the 3rd quarter. On a third and four, Leak dropped back to pass and the offensive line let everyone zip by straight to him. The sack crushed him and set Auburn up for the blocked punt that put them ahead by one. On Florida’s next possession they faced a similar third and four at almost the same spot on the field. Barely two minutes had passed. At the snap of the ball, again the O-line opened up and let Leak get killed.

Meyer should have done a million things differently in this game. I can’t fault him for the loss, though. There was a perfect storm of ineptitude in Jordan-Hare. Against LSU and ‘Bama — and even Kentucky — we were able to do enough things well that the horrible mistakes didn’t matter. The Gators didn’t actually play any worse than they have been playing lately. The other team just managed to not play quite as badly. It’s not like Auburn dominated the game. 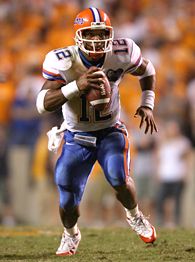 The blocked punt was the punter’s fault. Giving up sacks on consecutive third downs was ridiculous. Giving up a safety for holding in the end zone was just terrible. Not having any time-outs at the end of the fourth quarter was retarded. Using Tebow as sparingly as they did was inexcusable. Like Spurrier did so many times towards the end of his reign, the coaches failed to adapt to the situation and let a very winnable game get away. The fumble-that-wasn’t didn’t lose the game. It hurt, to be sure, but this is one time when we can’t blame poor officiating on the loss.

Being undefeated is glorious, for however long it lasts. But now we’re not. And it’s likely that we’ll lose again. It’s time to sit Leak on the sidelines and start getting Tebow ready to assume the QB role. Leak’s tenure has been a failure, and that’s mighty disappointing. I really feel bad for the kid, but there were so many times that he should have checked out of bad plays and didn’t, and so many God-awful passes, that it’s seriously time to say it’s a lost cause. For 3+ years now I have been a big fan of Leak’s. The kid is gritty and tries hard. But it’s just not enough. We didn’t score a single point in the entire second half. That’s not Florida football. That’s not championship football. That’s Kentucky. That’s Vandy. That’s pathetic.

I switched from QuickBooks to FreshBooks in 2015 and am so glad I did. Everything about their billing system is easier.