I was in football nirvana this weekend. I watched no less than a dozen games — college and pro — since I left the office Friday night. The best by far was last night’s Boise State / Oklahoma Fiesta Bowl, one of the top ten football games I’ve ever seen. While watching Saturday night’s Giants / Redskins contest on the NFLN I kept wondering about all the commercials they kept airing for themselves. “Why in the world,” I asked, “do they keep showing me commercials for something they know I already have?”

The only people who could have possibly seen all the ads for the NFLN were the people that currently have the NFLN. And it wasn’t just the 30-second commercials spots, either. During the game they were constantly bombarding me with teasers and float-overs talking about how wonderful they are. Aside from the fact that it was mildly annoying, it was also pointless!

Football games — and live sports in general — are the only broadcast events during which an advertiser is ever going to be lucky enough to get me to see a commercial. Like 80% of all viewers with TiVo and / or DVRs, I skip every commercial. The only time I don’t do this is when I’m watching a sporting event. It’s just too risky for me to watch sports time-shifted — someone always calls me or sends me a text message and ruins the drama. The NFLN seemed to have no interesting commercials at all. Were they not able to sell ads?

I can handle the fact that there’s a Toyota logo in the middle of my steering wheel. I understand that. I can even handle the fact that there’s a Toyota logo on my front grill and my tailgate. And my wheels. And the mudflaps. (Now that I think about it, that’s kind of overkill, actually.) But if every time I flipped on the radio I heard a voice telling me how great Toyota is I think I would be more than a little annoyed. Why are you showing me advertisements telling me to get the NFLN when I’m already watching the NFLN because I already have it?!

Gregg Easterbrook‘s Tuesday Morning Quarterback this week has a little blurb on this, so I wasn’t the only one wondering about it.

… NFLN ran a dozen “house ads,” or ads for itself. The spots fairly begged viewers to call their cable carriers and demand NFL Network. It’s nice to know that even the mighty National Football League needs public opinion on its side. But the ads urging you to call your cable carriers and complain about not getting NFL Network were seen only by viewers who already got NFL Network! TMQ wondered if NFLN was running so many “house ads” because it hadn’t been able to sell the time to regular advertising customers. 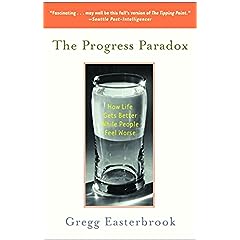 As a side note: Easterbrook’s book, “The Progress Paradox: How Life Gets Better While People Feel Worse“, is the best book I read in 2006. It should be required reading in college philosophy and psychology and social sciences classes. It should be required reading in high school. In addition to being the best football writer in the country right now, the man is a genius. I’ve already given the book to five different people as Christmas presents and have four more ordered from Amazon. If I haven’t already given you a copy, go buy it now. This is one of those books that will change your life.