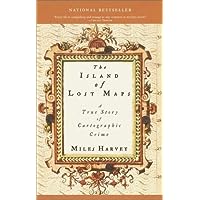 Somehow I managed to forget to write about this wonderful book. I read Miles Harvey‘s The Island of Lost Maps: A True Story of Cartographic Crime over a year ago and it is brilliant. I’ve been thinking about it lately because of the awesome song “Maps” by the Yeah, Yeah, Yeahs. You see, I have been in love with this song for months and I just can’t make any sense out of it. Let’s ignore the fact that I had heard the song a dozen times — and loved it — before I (a) knew the title and (b) realized that what she is singing in the chorus is “Maps / They don’t love you like I love you.” Maps? MAPS? What the hell does that mean?

So I’ve decided that she’s madly in love with this guy. She found a bunch of maps in his possession and now assumes he is going to leave her for someone else far away. The “they” in the song refers to the people at his destination. The “maps” is just an anguished exclamation. It works.

But a few days ago I started thinking that maybe she’d read this book. Maybe that’s what this song is. She’s madly in love with the main character in the book and is desperately trying to convince him to stop stealing maps and (re)turn his attention to her. The maps don’t love him. (He’s a little bit twisted.) Either way: Great song. Great book. I recommend them both.