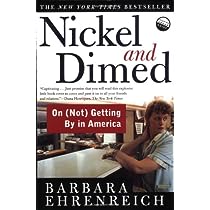 Late Friday night I finished reading Barbara Ehrenreich‘s Nickel and Dimed: On (Not) Getting By in America. This one’s been in my personal queue for several years; I sort of randomly found it on the shelf while looking for something to read on the plane to New York last week. It’s a psuedo-scientific exploration of what it’s like to live on minimum wage in America, and I can’t say that I was very impressed. Ehrenreich is a competent author and she weaves a half-interesting tale, but as a Democratic-tainted exposé it was nowhere near as good as Rivethead or any of Michael Moore‘s mockumentaries. More than anything it seemed like just a whining liberal complaining about how darn mean all those big corporations are. She comes down heavy on Wal-Mart — Who could blame her? — but there’s nothing earth-shattering in her story. I’ve worked plenty of minimum wage jobs in my day. It’s back-breaking and demoralizing and all that, sure. I know that. Doesn’t everyone? There’s just a lack of any true revelations or fact-reporting in this book for me to recommend it. If you want to read about the plight of the common American, the state of “the poor”, or anything truly brilliant concerning the U.S. economy you should grab P.J. O’Rourke’s Eat the Rich, Levitt’s Freakanomics, or Schlosser’s Reefer Madness. And this is as good a time as any for me to give another round of applause to Gregg Easterbrook‘s The Progress Paradox. Read that.